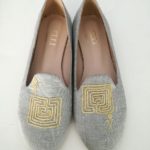 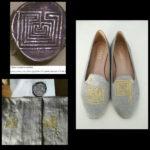 Made of gray shantung and inspired by a coin hosted at the Museum of Knossos.
Fabricated through traditional 16th century techniques used by typical female embroiderers who were making the traditional Cretan garments.
The specificity of this type of embroidery is that it is made with an uninterrupted thread which returns to the point where it started without being cut, just like Ariadne’s thread.
This design also includes the symbols for man and woman, the beginning and the end,as they are depicted in Linear B on jars dating from that time.

No products in the cart.