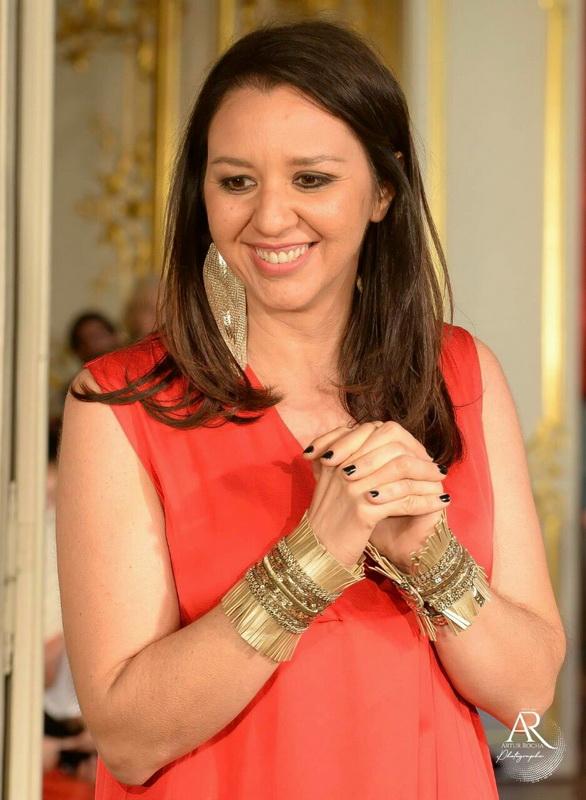 She grew up playing with her mother’s fabric scraps from the famous fabric shop of the family or running around the vineyards belonging to her uncles in Crete, who are famous winemakers having received several awards from all over the world for their wines.

Elli Lyraraki was born and raised in Athens but she traces her origin in Crete, at a small village of Heraklion, Crete, called Alagni, or Alagonia as was its name back in the olden days. It is well known that a large part of the ancient Greek mythology was formed at the sunny island of Crete.

Zeus, taking the form of a bull, abducted Europa and brought her to Crete. Their union gave birth to Alagonia, the designer’s birthplace, her homeland. To you, the abduction of Europa may simply be a Renaissance painting but for the designer whose mother tongue is Greek, the word Europa indicates the woman with the wide eyes, who can look wide!

Thus, it is under such wider perspective that the designer from Alagonia named her collection of numbered, handmade footwear introduced to us for this year’s season, during fashion week.

Elli studied music and interior design in order to respond to the needs of the family business, which she took over; then, 8 years ago, she and her family moved to Chania, Crete. Together with her husband who was well aware of the old art of making sandals, they set up a small workshop where they began creating handmade leather sandals. The couple design and make handmade leather sandals, wedge-heel shoes, ballerinas, bags, earrings, bracelets and necklaces.

Early on, they fell in love with this work, and step by step, they managed to nurture their dreams and creative aspects. Nowadays, their ready-to-wear collections are available in several stores all over Greece and abroad.

This year, Elli Lyraraki will introduce us to her new couture collection Alagonia which includes 15 pairs of numbered handmade shoes, inspired by the Minoan civilization, the most ancient European civilization, and more particularly from the world renowned frescoes of Knossos. Respective research for the collection was completed in collaboration with archeologists and historians, as well as with craftsmen who had thoroughly studied techniques used during the 16th century, based on traditional embroidery techniques for handmade traditional Cretan garments, and the famous uninterrupted thread, which cannot be cut.

Moreover, for those entirely handmade shoes, she worked together with specialized painters who applied the batik technique of wax-resist dyeing on silk, used for the first time on shoes. In addition, silversmiths and goldsmiths created gold jewelry using precious and semi-precious gemstones which were attached on the shoes, as well as the jewelry collections accompanying the shoes.

Among the jewelry suggested, we may see the Gold Bee, which is currently hosted at the British Museum: its eyes are made from rubies for the sandals, from black brillants for the earrings and from emeralds for the necklace. The bull is made of gold and lapis lazuli, the gemstone used by the Minoans themselves!

The collection is completed with pure silk foulards painted through batik on silk. Each pair of shoes is coupled with a handmade silk pouch, inspired by the vourgali, a typically Cretan type of textile bag, where it is embroidered, with an uninterrupted thread, the symbol of Alagonia, a small flower appearing on the Knossos frescoes.

Elli Lyraraki was born and raised in Athens.

She studied music and Interior design.

In recent years, Elli has been living permanently in her place of origin, in Crete.

She is the first Greek Designer to present with great success a collectible line of shoes and jewelry at the Haute Couture Fashion Week in Paris inspired by the Minoan Culture.

All the International Fashion Magazines wrote about this inspiring Collection ALAGONIA-MINOAN STEPS, which captured an entire culture, the First European culture of Europe on shoes.

In the summer of 2019 had the opportunity to accompany her shoes, Victoria’s Beckam and Isabel’s Marant collections to an ecofriendly fashion show at Saint Tropez.

In 2020 she had the honor to design the sandals and jewelry for the Tokyo Olympics.

Elli Lyraraki is Art Ambassador of Greece, participating in a new project where distinguished Greek artists present their work in various embassies in Greece and around the world.

She is also a painter and many of her works have been exhibited in various painting exhibitions in Athens, London, Moscow, Instanbul and Cyprus.

The French-German Channel ART-E presented a Documentary in 2021 about her work and how she is inspired by Minoan Culture and life in modern Crete.

She is the founder of the Minoan Steps Foundation in order to preserve the old arts and traditions inspired by the culture of Crete.

In 2020 opened the first boutique-gallery in Chania, Crete, where all the collections and many of her paintings are presented.

In 2021 the Olympic committee and the Olympic Federation commissioned her to design the jewel-symbol of the Olympic sport of Archery.

No products in the cart.